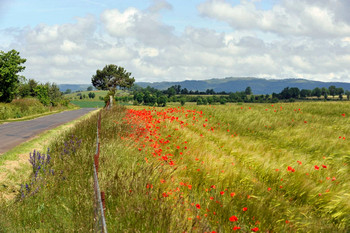 Salléles d’Aude is in the Languedoc-Roussillon province of France, situated along the Canal du Midi. The nearest large town is Narbonne 10kms away. A short 20 minute drive takes you to several beaches. The house is only 1 hour away from the Spanish border, along the Mediterranean coast. Heading inland, one can explore the spectacular Montagne Noire. All around us as far as the eye can see we are surrounded by beautiful vineyards.

Montpellier & Carcassonne:
These towns are a 1hr drive to Salléles. Several budget airlines fly to either Carcassonne or Montpellier. Both airports are serviced by all the major car rental companies.


Toulouse:
Is a 90min drive to Salléles. Major Airlines (KLM, Air France, BA & Lufthansa) fly into Toulouse airport which is serviced by all the major car rental companies


Car Rentals:
Car rental agencies are available at all airports as well as the Narbonne train station. Rentals can be easily booked using www.europcar.com. If you will be away for longer than 17 days you can lease either Peugeot, Citroen or Renault, which can be a lot cheaper (www.ukandeuropetravel.com). Note that diesel (gazole) is the cheaper fuel to buy and widely available. Choosing an automatic car can be helpful if you are unfamiliar with driving on the right hand side of the road.


The Area:
The Languedoc-Roussillon region is sometimes referred to as “the largest vineyard in the world.” Easily 600 square kilometres of rolling vines, the area is one of the largest wine producing regions in Europe. One can do a wine tasting (degustation) at any time of the day, in any of the surrounding villages, towns or markets in the area. Visit in September and you will see the frantic activity of the “vendange” or harvest. The roads become sticky with grape juice and the air is fragrant with the fermenting grapes.


Exploring:
From Salléles, why not drive via the Costa Brava and explore Barcelona, Spanish tapas and cava. Or a drive to the Principality of Andorra only 2 hours away for hiking or skiing in the Pyrenees mountains. You can use the house as a base from which to take longer 2-3 day trips, to Aix-en-Provence (three hours) or St Tropez (four hours).

A 60 minute drive through the vineyards takes you to the ancient town of Pézenas - a glorious town with over 30 antique shops. Also only 90 minutes NE takes you the great engineering marvel of the Millau Bridge. The Millau Bridge is the tallest vehicular bridge in the world; one mast summits 343m (1,125 ft), taller than the Eiffel Tower and only 38m (125 ft) shorter than the Empire State building. From here, a short drive will take you to the caves of Roquefort where you can see for yourself where and how this wonderful cheese is produced. Nature lovers can take a 2 hour scenic drive through the spectacular Gorge du Tarn, stay in St Enimie and arrange to kayak the river Tarn, or hike the mountains.

If you are a history buff, this region was the land of the Cathars, a religious sect that flourished in the 12th and 13th centuries. The Catholics regarded the Cathars as heretics and launched the ruthless Albigensian Crusade to crush them. Cathar fortesses and ruins dot the nearby countryside along with gruesome tales of persecution and torture.

If you have ever watched English chef Rick Stein as he barges his way along French canals, you will already know the area. Come and explore for yourself the romance of the Canal du Midi, the hearty local food and home grown produce of the region. There is so much to do here, and the Languedoc provides both authentic and simple local French cuisine in a relaxed authentic region of France. You will want to return again and again.
© www.rentmyfrenchhouse.com
Powered by ZENFOLIO User Agreement
Cancel
Continue